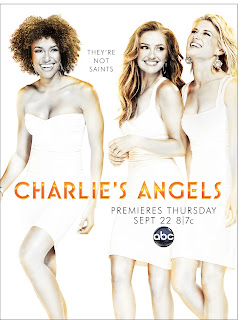 I have always thought that inside all of my girlfriends there has always been an Angel… a Charlie’s Angels of course!… They seem to kick ass at whatever they do and they are always looking great! So I’m excited that Drew Barrymore, the Executive Producer of Charlie’s Angels has made this happen! See it on Thursday, September 22 at 8/7c on ABC.

Set in Miami, this fun, glamorous, action-packed take on the 1970s smash hit series introduces us to three new angels, all fearless detectives, head-turning beauties and close friends. There’s Abby (Rachael Taylor), a Park Avenue princess who became a world-class thief. Then there’s Kate (Annie Ilonzeh), a Miami cop who fell from grace, loosing both her career and her fiancé. Finally there’s Gloria, a disgraced army lieutenant who has a way with explosives. When one of the angels’ missions ends in Gloria’s tragic death, Charlie persuades them to partner with Gloria’s childhood friend, Eve (Minka Kelly), a street racer with a mysterious past. They may not know each other yet, but one thing’s for sure — Abby, Kate and Eve will always have each others’ backs.

So Here is how to win the GIVEAWAY!

One (1) winner will receive:

All you have to do are Four simple steps:

4. Leave a Comment telling me How you are a charlie’s Angel!

The Winner will be notified Via Twitter and JesSofiaSays FaceBook Page After the Season Premiere Thursday, September 22nd 8/7c